The Proteaceae family of plants is incredibly diverse. Spread across the southern hemisphere, it is most commonly found in Australia and the southern regions of Africa. Australian native Proteaceae include Hakeas, Banksias, Macadamias, and Grevilleas, as well as the Waratah.

Many Proteaceae are used successfully as cut flowers. Typically, the flowers are Inflorescent, that is, although they may look like one large flower, as in the case of the Waratah, they are actually made up of many small flowers. Some of the most popular Proteaceae used for flower arranging include the Hairpin Banksia (Banksia spinulosa) and the yellow Coastal Banksia (Banksia integriflora), a wide range of Grevilleas, such as the yellow Silky Oak (Grevillea robusta) and bright pink Prickly Grevillea (Grevillea juniperina) and, of course, the state flower of New South Wales, the Waratah (Telopea speciosissima).

Hakeas are another diverse group from the Proteaceae family, and many make wonderful cut flowers, particularly Hakea decurrens. The Pin Cushion Hakea (Hakea laurina) is one of the most stunning of the Hakea variety of plants, both in its hard wood-looking bud shape and its flower form, which is a bright pink ball with light yellow spikes. Hakea seedpods are also widely used in flower arranging, as they come in a huge variety of interesting shapes.

Many of Proteaceae plants will grow in a wide range of soil and climate conditions, although they will generally not do well in more arid areas. The Coastal Banksia in particular likes well-drained, sandy soils, but most species of Banksia grow well in Sclerophyll-type conditions.

Proteaceae are widely coveted by gardeners that want to attract birdlife, as they not only create a protective habitat, but also nectar or fruit for food. In fact, Banksias in particular are an important part of the Australian native food chain, due to their prolific production of nectar and the protective habitat that their spiky leaves and flowers give to small birds. They are also an important source of income for the cut flower industry. Many also produce perfumes, particularly some Grevilleas, such as Grevillea curviloba. Some proteacae also produce small, edible fruit, including some varieties of Macadamia, and the Red Bauple Nut (Hicksbeachia pinnatifolia).

Many Proteaceae plants are an important part of life in Australia. The Banksia seed cone, for example, was made famous by the author May Gibbs, who created the "Bad Banksia Men" in her book, Snugglepot and Cuddlepie. The Telopea speciosissima variety of Waratah is the official floral emblem of New South Wales. 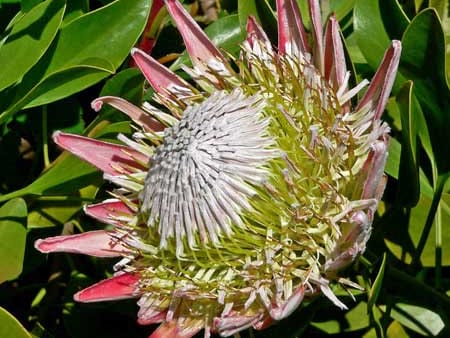