The Kangaroo Paw is perhaps one of the most recognizable and popular of all the Australian native flowers. Hailing from the southwest of Western Australia, they are increasingly found in gardens across the country, and are ideal for cut flower arrangements.

Kangaroo Paws are classed as perennial herbs and grow from an underground rhizome system. They have an extensive flowering season, usually from spring to early summer, although some varieties, such as Anigozanthos flavidus, will flower from November to February. The plants usually die back to the rhizome by late summer, so it is best to hard prune the plant to the ground level for a good bloom the following season.

In recent years, the cultivation of kangaroo paws has grown rapidly, and with this, new varieties have become available, many of which are tougher and more resistant to disease. However, as with all Kangaroo Paws, they can develop some problems in the garden, such as fungal infections that can lead to black spots on the leaves. This can be rectified by pruning off the effected leaves, which also encourages new leaf growth. In general, planting Kangaroo Paws in a sunny location, ensuring they have adequate water and pruning regularly will be enough to ensure many varieties are happy and blooming year after year.

Kangaroo Paw flowers are most colourful when they in bud, as it is the tiny hairs on covering the bud that give them their colour. When the flowers bloom, they add a new contrast to the overall look of the plant, and come in a variety of colours, some with white petals and orange stamen, others with green petals and red stamen. Their fascinating double life as both bud and flower is what makes them so popular among gardeners and within cut flower arrangements. It also dries well, as is widely used in dried flower arrangements also. Kangaroo Paws have no fragrance.

Mention must be made of the King of all the Kangaroo Paws, the Green and Red Kangaroo Paw (Anigozanthos manglesii), which was proclaimed as the state floral emblem of Western Australia on 9 November 1960. In its natural habitat, the Red and Green Kangaroo Paw flowers between August and October. It is a protected species, so collectors of any part or all of the plant must be licensed. 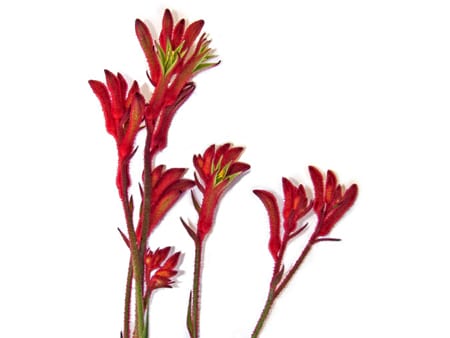