Sturt's Desert Rose (Gossypium sturtianum var. sturtianum) is a woody, compact shrub that grows between 1-2 metres in height and has a life span of up to 10 years. In its native habitat, which includes the southern regions of the Northern Territory, northeastern South Australia, western Queensland, western New South Wales and parts of northern Western Australia. Another variety of Sturt's Desert Rose, (var. nandewarense) is only found in northeastern New South Wales and the Expedition Range in central Queensland.

Sturt's Desert Rose was proclaimed the state emblem flower of the Northern Territory in 1961, when the state was still under the administration of the Commonwealth Government. Today, a stylized version of the flower adorns the state flag. It's also known as Darling River Rose, Cotton Rosebush and Australian Cotton.

The leaves of the plant itself are a lush dark green and usually oval in shape. The flowers of Sturt's Desert Rose have petals of about 5cm in length and are mauve in colour, contrasting beautifully with a red centre. The flowers close soon after cutting, so they are not suitable for cut flower arrangements, but they do make excellent live plant gifts that can be later planted into lawns, larger pots or any place that has light to moderate rainfall and good sunlight.

Sturt's Desert Rose was first described by the Scottish botanist, Robert Brown (1773-1858), after having received a specimen that was collected in the creeks along the Barrier Range in Central Australia by Captain Charles Sturt (1795-1869). Brown named the specimen Sturtia Gossypiodes. In 1947, its name was changed to Gossypium stutianum var. sturtianum by J.H Wills of the National Herbarium in Victoria.

Sturt's Desert Rose is easily cultivated, and can be propagated either by seed or cutting. There has also been a lot of success with hybridization of the plant, particularly with tropical plants from Africa, Australia and the Americas. One very successful hybrid between Sturt's Desert Rose and the American Gossypium barbadense has produced a plant with large and beautiful red flowers.

In the garden, Sturt's Desert Rose is an excellent addition. Because it is usually found in sandy or gravelly areas in dry creek or river beds, along rocky slopes and in gorges, it is extremely drought tolerant. It has a deep root system for accessing lower levels of water, and has minimal transpiration, so retains water very well. It is also a prolific bloomer, having flowers for most of the year, and peaking in late winter. They do not have a perfume, but the essence is used in Bush Flower Remedies. 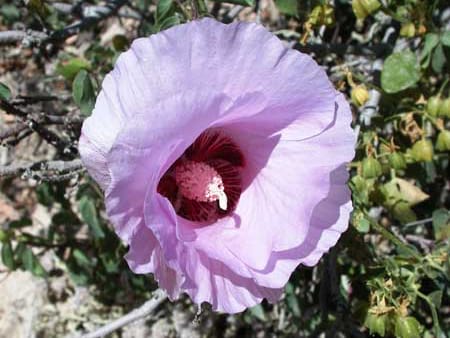