There are almost 100 species of Boronia found in areas right across Australia, but it is really only two of these species that are coveted for cut flowers, Brown Boronia (Boronia megastigma) and Red or Kalgan Boronia (Boronia heterophylla).

Boronias are part of the Rutaceae family, of which citrus are also members. Perhaps this is why Brown Boronia has such a wonderful, lemony fragrance and is sought after for the vase as well as the garden. Its small, cup like flowers attach directly to the branch stem, and it blooms in spring.

The Brown Boronia is bright yellow on the inside and a reddish-brown on the outside, offering a stunning contrast. However, it's a plant that's highly variable when cultivated from seed. Other variations include the red and yellow striped 'Harlequin', the brown 'Heaven Scent', a red 'Jack Macguire's Red', a yellow 'Lutea' and the dwarf 'Royale'. Brown Boronia is native to the southwestern region of Western Australia, growing from Perth to as far south as Albany.

Red Boronia is a somewhat deceptive name for Boronia heterophylla, as this evergreen shrub produces showy, magenta pink bell-type flowers, blooming from around the third week in October, and then upon fading, the flowers close to look like buds again, turning a paler pink.

Red Boronia, like Brown Boronia, is native to Western Australia, but is more robust than its cousin. Its perfume is slightly milder, but both its flowers and foliage have a sweet smell. Propagation of Red Boronia is generally successful with cuttings, as it can be difficult to collect seeds from the flowers.

Both Brown and Red Boronia can be temperamental to grow, but are worth the effort. They prefer dappled sun, and the roots must be kept cool in the summer months with good mulch cover. They like the soil to be moist, but well drained, and the roots should never be allowed to dry out. Pruning is best done after flowering, but regular pruning of the Red Boronia will encourage healthy, bushy growth.

There are other Boronia hybrids that are grown less for their scent and more for their beauty. These are generally not used in cut flower arrangements, but make excellent additions to the garden. They include 'Lipstick', which produces lollypop pink flowers, 'Aussie Rose', with rose pink flowers, and the 'Purple Jared', which has brilliant purple flowers.

Of course, there are many other species of Boronia, and it's a good idea to find out which are native to your local area. They will be more tolerant to the soil and climate conditions, and may help create shelter for native wildlife. 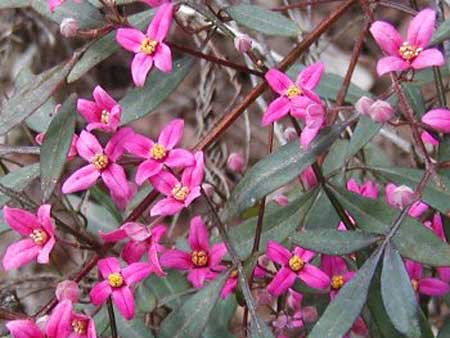