Bottlebrushes make a wonderful addition to any garden and are widely sought after for cut flower arrangements. Ranging from crimson reds, bright pinks oranges and yellows, Bottlebrush flowers are truly distinctive and long lasting. They have no perfume, but are great bird attractors.

There are approximately 40 species of Bottlebrushes within the genus Callistemon, and share many similar characteristics with the paperbark melaleucas, both of which are part of the Myrtaceae family. These extremely hardy shrubs can tolerate a wide variety of soil conditions, and flower most prolifically in a position of full sun. Their natural habitat is along the east and southeast of Australia, but can also be found in the southern part of Western Australia.

As the names suggests, Bottlebrushes are a long, bushy-type of flower, usually around 20m in length, although this varies from once species to the next. The flowers are Inflorescent: that is, they are made up of many tiny flowers, although they appear as one, and the colour comes from their many stamen rather than their petals, which are tiny. They usually flower from late November through to the end of February, making them a common sight during the east coast summertime. In recent years, bottlebrushes have become a popular choice in roadside landscaping.

As cut flowers, Bottlebrushes have stems of 30 to 60cm in length. If kept cool, and with the addition of a preservative in their water, they can last a considerable length of time. Following their flowering stage, the fruits beneath the petals and stamen also make interesting additions to flower arrangements. Today, most cut flowers come from cultivated field crops grown in Western Australia, New South Wales, Victoria and South Australia.

Bottlebrushes can be easily cultivated from seed, but some fruit don't release their seeds for many years, although some species will release their seed after a year. In their natural habitat, fire has become a natural partner of the Bottlebrush, helping to both release the seed from the fruit pods and also encouraging new, healthy growth in the plant itself. Bottlebrush pods can be kept in paper bag until the seed is released.

One of the most popular species of Callistemon grown for its stunning flowers is the Prickly Bottlebrush (Callistemon brachyandrus). These small, spiky red flowers are covered in yellow pollen, making them both attractive in flower arrangements and, in the garden, attractive to birdlife, for which the prickly leaves also provide protective shelter. This species grows well in the full sun of hot, dry areas, and grows to around 3 metres in height. 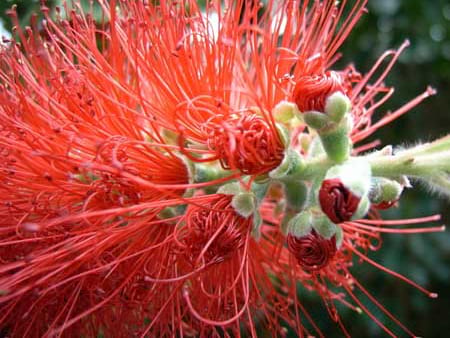