As the official floral emblem of the State of New South Wales, the Waratah has a special significance for those living within the state. But it is not only its symbolic attributes that attract people to it: the Waratah is actually a diverse group of flowers that are part of the Proteaceae family. The name 'Waratah' comes from the Eora people, the original inhabitants of the Sydney area.

The Waratah used as New South Wales' emblem is Telopea speciosissima, and has bright red, Inflorescent flowers - that is, it looks like one flower, but in fact it is made up of many smaller flowers, a characteristic common to the Proteaceaea family of plants. Waratah flowers can range from 6-15cm in diameter, depending upon the variety, and are native to the southeastern regions of Australia, including New South Wales, Victoria and Tasmania. They usually flower from October to November, although this varies slightly from one variety to the next.

Today, bush Waratahs are protected, but at one time, this is where most cut Waratahs found in the flower markets of Australia came from. This is because Waratahs are notoriously difficult to cultivate, and it is only in the last few years that the cultivation process has become more successful on a commercial level.

One of the most common issues with cultivation is 'damping off ', which is when the seed or seedling dies as a result of fungal infestation. In cases where the seed becomes infested, it becomes black and dies, or if it does germinate, is already in a weakened state. Fungal infestation can also happen when the plants are seedlings, and can be detected if the stem starts to thin and weaken. Most commonly, fungal issues relate to the seed or seedling being too damp for extended periods of time.

More recently, cultivation has become more successful with the hybridization of certain cultivars, and more developed practices in the cultivating process. The most commonly cultivated varieties of Waratah include "Fire and Ice", which is red with white tips, "Songlines", which is pink while still a bud but is bright red when open, "Braidwood Brilliant", which is a cross hybrid of Telopea speciosissima and Telopea mongaesi and the stunning, blood red "Shady Lady ", which is a hybrid of Telopea speciosissima and Telopea oreades. Of course, not all Waratahs are red or pink: the elegant "Wirrimbirra White" is, as the name suggests, almost pure white.

Because of its wide range of colours and sizes, the Waratah is a very versatile flower for cut arrangements. They don't have much of a perfume, but in the garden they are a great bird attractor, as they love its rich nectar, found in each of its tiny flowers that make up the flower head. They generally love sandier, well drained soils, but will also grow in more rich basalt-based soils.

Waratahs make a stunning addition to any cut flower arrangement or - if you have a green thumb - garden. 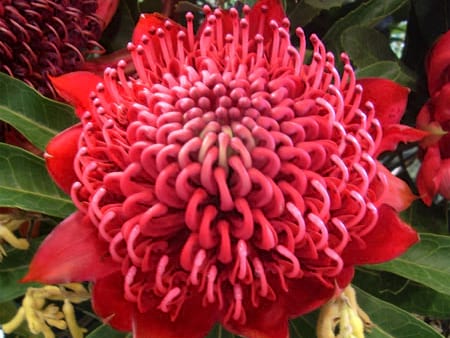