Woody Pears are from the genus Xylomelum, and are part of the Proteaceae family. Xylomelum pyriforme is native to the eastern states of Australia, while the Western Woody Pear, Xylomelum occidentale is native to Western Australia.

Both the flowers and the fruits of Woody Pear can be used in cut flower arrangements. The flowers bloom in spring and are creamy white in colour, but with rusty hairs that can give them a pink to red look. These inflorescent flowers, which share similar characteristics to other plants in their family, such as Grevilleas, are spike shaped and can be up to 8cm in length.

Foliage of the Woody Pear is elliptical when the plant is mature and serrated when young. The leaves, which are quite large, add volume to cut flower arrangements.
The fruit of the Woody Pear are pear shaped and approximately 9cm long. They require fire to open, or for the tree to die, so often if you do come across them in flower arrangements, it's quite usual for the fruit to be closed. Once open, the fruits have a two-winged seed. The open fruit itself has an interesting shape and can be used as a decorative item for many years.

Woody Pears are rarely cultivated, as it can take up to 20 years for them to bear fruit. 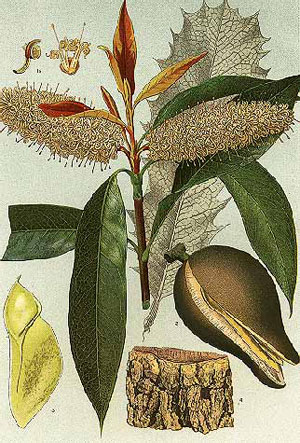