Spring is a wonderful time in any flower-enthusiasts year, and in Australia it's no different. Some of the most fragrant and colourful of all the Australian flowers bloom during the spring months of September, October and November, including Boronias, Agonis, Crowea and Kunzea, to name a few.

One flower to pop open in spring is the Boronia. The two Boronia species used for flower arranging include Brown Boronia (B. megastigma) and Lipstick Boronia (B. heterophylla). Brown Boronia offers a wonderful contrast between its rusty brown/red bell-shaped flower's exterior and its bright yellow interior. During spring, it flowers prolifically along the stem. Lipstick Boronia has similar shaped flowers that are bright pink instead of brown. Like many plants that are part of the Rutaceae family, which includes citrus, both Brown and Lipstick Boronias are renowned for their exquisite perfume.

Although it begins its bloom in autumn, Crowea becomes even more prolific in spring, when its small white or pink flowers become even more plentiful along its stems. Crowea is a beautiful addition to any arrangement. It's fantastic as a large bunch on its own, and also makes a wonderful filler with other, larger flowers.

Western Australian Peppermint, also known as Willow Myrtle (Agonis flexuosa) is a flowering tree from Western Australia. In spring, it produces a bounty of small, white flowers along its willowy branches. Combined with its long, graceful foliage, Agonis is as useful as it is beautiful.

Native to the Sydney region, the Flannel Flower (Actinotis helianthii) appears in spring as well. This delicate, small flower has long been a favourite among the country's wild flowers, and was immortilised by the famous Australian author and illustrator, May Gibbs. The name of the flower comes from its soft, flannel-like petals, which make it a tactile as well as an aesthetic joy.

Kunzea also blooms in spring, and the variation K. ericifolia is used widely in cut arrangements during this time. Kunzea is part of the Myrtaceae family, which also includes Eucalyptus, Leptospermum (tea tree) and Callistemon (Bottlebrush). Traces of these can be found in the cream to yellow flowers of Kunzea, which resemble a gum flower and sit at the end of the shrub's branches. The flowers also have a pleasant perfume.

Other spring flowers to try in your arrangements include the Rice Flower (Ozothamnus diosmifolius, not to be confused with the other Rice Flower, Pimelea nivea, which flowers in summer), with its hundreds of tiny white flowers, and the stunning Isopogon (Isopogon cuneatusI), which is a large, pink to purple pinwheel style of flower. Late spring will also see the start of the Callistemon season. 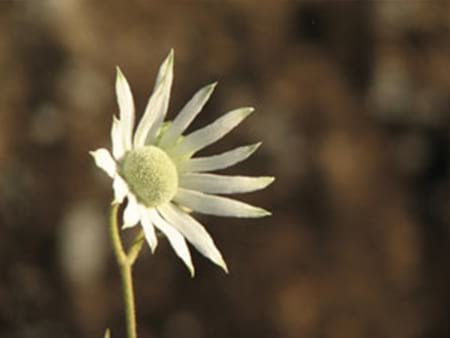