Summer is a wonderful time to enjoy Australian native flowers in all their glory. Not only does this season have its own specialties, you can also enjoy many of spring's continuing flowers well into the hotter months.

One of summer's most beloved flower families is the Banksia, which blooms from August until the end of December. Banksias come in a huge variety of colours and sizes, including the Possum, or Woolly, Banksia (Banksia baueri). Pale yellow to orange in colour, this variety of Banksia is one of the largest found in cut flower arrangements, with the inflorescent being approximately 300mm tall.

The Showy Banksia (Banksia speciosa), also yellow in colour, is smaller than the Possum Banksia, at around 120mm tall. The Showy Banksia's structure can vary, having either a spiralling or vertical pattern within the inflorescent.

The aptly named Scarlet Banksia (Banksia coccinea) gives a burst of colour to any arrangement. Its foliage is shorter and sits nicely under the flower, so that its striking features stand out. Other Banksias, such as the Banksia Baxteri, have much longer foliage, which can help to fill out an arrangement.

One of summer's prettiest flowers is White Myrtle (Hypocalymma angustifolium). This plant's common name can be deceptive, however, as the small flowers can be either white or pink. Hypocalymma is related to both the Tea Tree (Leptospermum) and the Bottlebrush (Callistemon).

As summer in Australia also means the arrival of the festive season, it's also time to get hold of the Christmas Bell flower (Blandfordia nobilis). Native to New South Wales and Queensland, the Christmas Bell, or "Gadigalbudyari" in the Cadigal language indigenous to the region, is a perennial herb that is fast becoming a symbol of the season. Its flute-shaped bells are red with bright yellow tips around the opening of its cup.

For more delicate arrangements, summer also offers one of Australia's most recognizable plant families, the gum. It's the antlers and styles that give the gum flower its beauty and delicacy, but also makes them shorter lived as a cut flower.

Summertime is also the season of some popular bouquet fillers, such as Smoke Bush (Conospermum) and Christmas Bush (Ceratopetalum gummiferum). Gum Nuts and Woody Pear are also available and provide textural contrast to your cut flowers.

Some of Australia's most loved flowers show off their beauty in summer, making it one of the best times of year to enjoy cut flowers in your home every day. 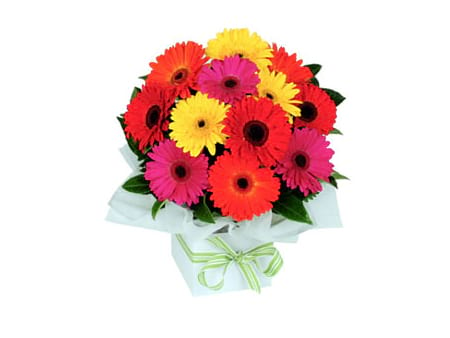