When you think of autumn, do you automatically think of reds and yellows, browns and oranges? In Australia, the foliage of many plants stays green throughout the year, making great fillers for cut flower arrangements. The season also benefits from extended summer flower blooms and, at the other end, heralds the beginning of Australia's best winter flowers, giving you the best of both worlds between the two.

Australia's autumn, from March to the end of May, is an excellent time for trying something new with your flower arrangements. One of summer's gifts to autumn is the continuing bloom of Western Australia's Swamp Bottlebrush (Beaufortia). These medium-sized and wiry flowers are not as long as the more traditional Callistemon, but offer a wonderful burst of colour with their bright red flowers heads that sit in the middle of the stem.

Crowea comes into flower in March and blooms until November. It's a wonderful plant, with dark to light pink, five-petalled, small star-shaped flowers that grow right off the main stem. Keep your eye out for White Crowea as well.

Rock Thryptomene (Thryptomene saxicola) tends to bloom from February through to November. Although part of a genus of plants that has a family membership of almost forty species, Thryptomene saxicola is native to the southwestern region of Western Australia. Its flowers range from white to deep mauve, depending on the variation, and are made stunning not by their tiny size but by the sheer number of them that appear along each stem.

It's also the season for Stirlingia, a WA native. Stirlingia has very delicate flowers, so is often sold with the fruit instead, which is dyed. It's available from the latter part of autumn, so keep your eye out for it towards the end of April/beginning of May.

Some flowers, such as wattle, are available all year round, and can bring some bright colour to the season. Smoke Bush (Conospermum) and the foliage of the Rice Flower (Pimelea nivea) are also useful as fillers for arrangements. 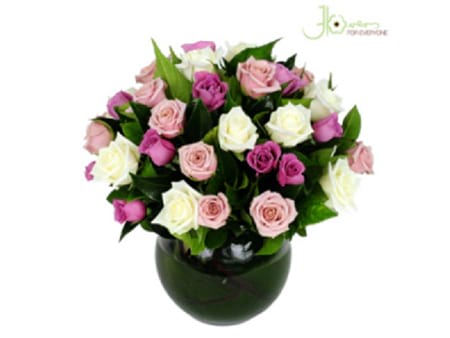