Smokebush (Conospermum) is a member of the Proteaceae family and is native to Australia. It is a genus made up of 53 different species, six of which are cultivated for the commercial flower market. These include "Blue Lace" (C. eatoniae), Slender Smokebush (C. caeruleum), Tree Smokebush (C. triplinervium), Common Smokebush (C. stoechadis), Plume Smokebush (C. incurvum) and Tassel Smokebush (C. crassinervium).

The different species of Smokebush vary in terms of foliage and flower colour. For example, Blue Lace has no leaves on its stem, but a mass of China blue flowers, while Slender Smokebush has large leaves and fewer blue flowers. Other species, such as Common Smokebush, have white or grey flowers.

Blooming time for the various Smokebush species also vary. Tassel Smokebush flowers from December through to February, while Plume Smokebush blooms from August to October. Blue Lace and Slender Smokebush bloom from July.

Smokebush is a very useful plant in flower arrangements as both a filler and to add colour. As a commercial crop, it has enjoyed a lot of success, and is now exported as fresh or dried flowers to Europe, the USA and Japan.

In the garden, the various species of Smokebush have different environmental preferences, but in general, they need to be well watered within the first year, after which they are quite hardy. Pruning in the first year will help with establishment also, and promote good growth. 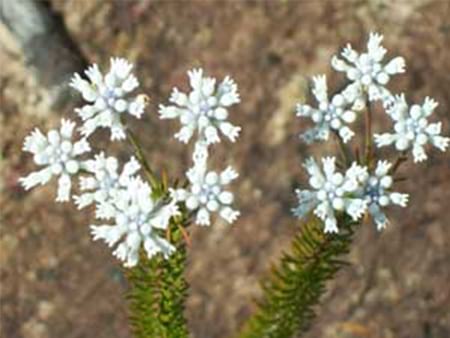