Commonly known as Drumsticks, Isopogon is a genus of around 35 species, most of which are endemic to Western Australia.

Isopogon cuneatus is the most widely used species in cut flower arrangements. This small flowering shrub comes from the area around Albany in Western Australia, and is part of the Proteaceae family, which includes Banksias, Grevilleas, Macadamias and Hakeas. The shrub itself can grow anywhere from half a metre to over 2 metres in height, and flowers from the middle of spring until the end of summer.

The flower of the Isopogon cuneatus, like many of the Proteaceae family, is an inflorescent - that is, it is many small flowers that make one large flower head. It is pale to bright pink in colour and more closely resembles a pinwheel style of flower. It has a long stem with leaves that sit under the flower.

Isopogon ceneatus is simply beautiful as a cut flower, either as part of an arrangement with other Australian plants, or as a bunch. They are not as widely available as other Proteaceae, which makes them an interesting and unusual choice, and guaranteed to be a conversation point.

If you decide to grow Isopogon in your garden, be sure to look up the best variety for your area, as this will make sure it adapts well to your garden's conditions. For instance, if you're in the eastern states, the yellow flowered Isopogon anemonifolius will be more resilient than those Isopogons edemic to WA. 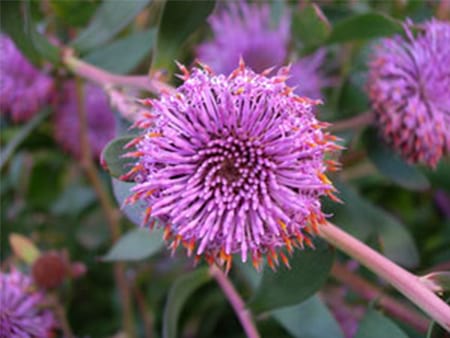