Flower of the Holy Night: The Poinsettia Xmas Story 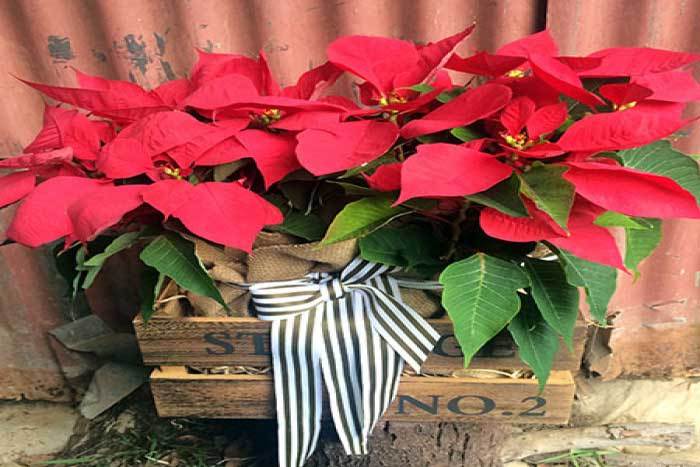 The poinsettia are one of those plants that symbolises Christmas time for many of us. But why? Is it just a random, commercial gimmick because they happen to be bright red and green? Or is there a link to a moment in history that has become lost in mainstream Anglo Saxon Christmas celebrations? What is the Poinsettia Xmas story?

Well, it so turns out that the humble poinsettia plant was used as early as the 17th century by Mexican Franciscan monks in their Nativity processions…. (1)

Native to Central America (especially an area of southern Mexico known as ‘Taxco del Alarcon’ where they flower during the winter), the ancient Aztecs called them ‘cuetlaxochitl’. The Aztecs had many uses for them including using the flowers to make a purple dye for clothes and cosmetics and the milky white sap was made into a medicine to treat fevers. (2)

So how did the poinsettia progress from an Aztec dye and healing remedy, to Franciscan monks using them as a symbolic Christmas decoration in their processions?

‘According to Mexican legend, a young boy (or young girl named Pepita in some versions) was on his way to visit the village Nativity scene.  En route, he realized he had no gift for the Christ child. He gathered pretty green blooms from along the road and brought them to the church. He was ridiculed and mocked by the other children for his humble gift. Yet when laid at the manger, a beautiful, red, star-shaped flower appeared atop the green leaves’ (1).

Considered a miracle, from that day on the bright red flowers were known as the ‘Flores de Noche Buena’, or ‘Flowers of the Holy Night’.

Furthermore, the holy link between Christmas and the poinsettia is taken one step further, with the star-like shape of the poinsettia flower and leaves having become a symbol of the Star of Bethlehem, their red colored leaves symbolizing the blood of Christ and the white leaves representing his purity.(2)

From the Aztecs to Pepita to Monks to South Carolina

In 1828, Joel R. Poinsett, the first U.S. ambassador to Mexico, was introduced to the plant and fascinated by it. He brought it back with him to his home and greenhouses in South Carolina, where he cultivated the plant and shared specimens of it with friends and botanists across America. In the U.S., the plant was later christened the ‘poinsettia’ in honour of the first American to discover it. (1)