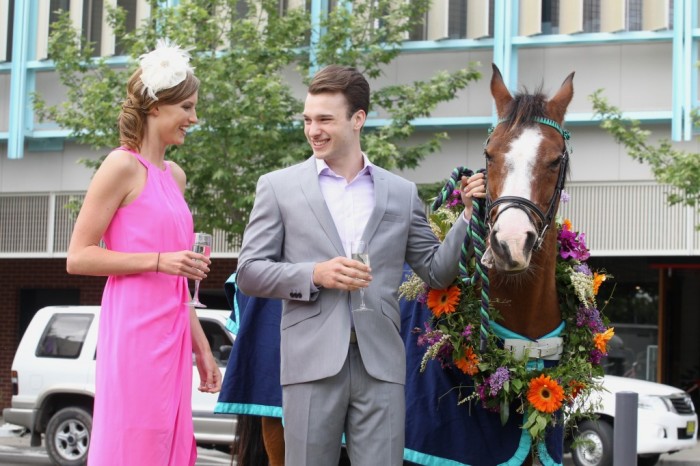 Did you know Melbourne’s Flemington Racecourse, home of the Melbourne Cup, boasts the largest public rose garden in the Southern Hemisphere?

That is quite the responsibility for any gardener. Yet ‘Keeper of the Roses’ for over 30 years, Terry Freeman knows everything there is to know about caring for of over 16,000 roses bushes.

“In a funny way we are farming roses, not just growing them,” Freeman says. “Much like everything, you put as much as you can into it. The more effort you put into your roses, the better they perform.” (3)

According to ABC’s Gardening Australia, the roses were initially planted in the 1960’s as a cost cutting measure, to replace the more costly and labour intensive annuals they grew in the racecourse’s own nursery.

Nowadays roses and the races are synonymous. And to ensure they bloom in the first week of November to coincide with the Melbourne Cup, takes a lot of skill and knowledge of rose growing. It is an artful manipulation of their flowering time involving ‘pruning, watering, fertilising and pest control carried out to a strict regime’. (1) A bit like a ‘rose boot camp’.

A typical schedule comprises of one pruning and two trimmings a year for each of the 16,000 rose plants. They receive a solid feed of fertiliser, an all-Australian diet of Sudden Impact and Charlie Carp, three times a year in September, late November and late January.

“The carp-based feed deposits a slightly oily coating on the leaves, deterring black spot among the roses,” Freeman says.

An additional deterrent to black spot is a drip-irrigation watering system. (3)

Plus fortunately for Terry, he has an ample and free supply of top quality mulch to aid his efforts, collected from horse manure, straw and leaves dropped on the course.

“When roses are pruned, fed and watered on schedule, they will perform under almost any condition as they are sturdy plants. Never forget, though, that nature still has the last word.” (3)

Says Freeman: “We do all we can, but we are in the hands of the elements.”

Flemington Racecourse’s roses are predominantly floribundas (they produce flowers in dense clusters). New roses are purchased as potted plants in December so they have time to settle in before the following November race schedule.

“We used to buy bare roots, but in the past three to four years we have been buying mostly potted plants as they establish more quickly,” says Terry Freeman.

It must be hard to have a favourite when you are passionate about roses and work with so many varieties, but according to the weeklyreview.com.au, “Freeman’s personal favourite is a rose called Grimaldi, a French floribunda with blooms that are salmon pink splashed with white. About 5000 of these roses are planted along the main driveway of the racecourse.” (3)

You can learn a lot from the experts on a guided tour of Flemington Racecourse, which delves into its fascinating history, including a tour of the rose gardens.